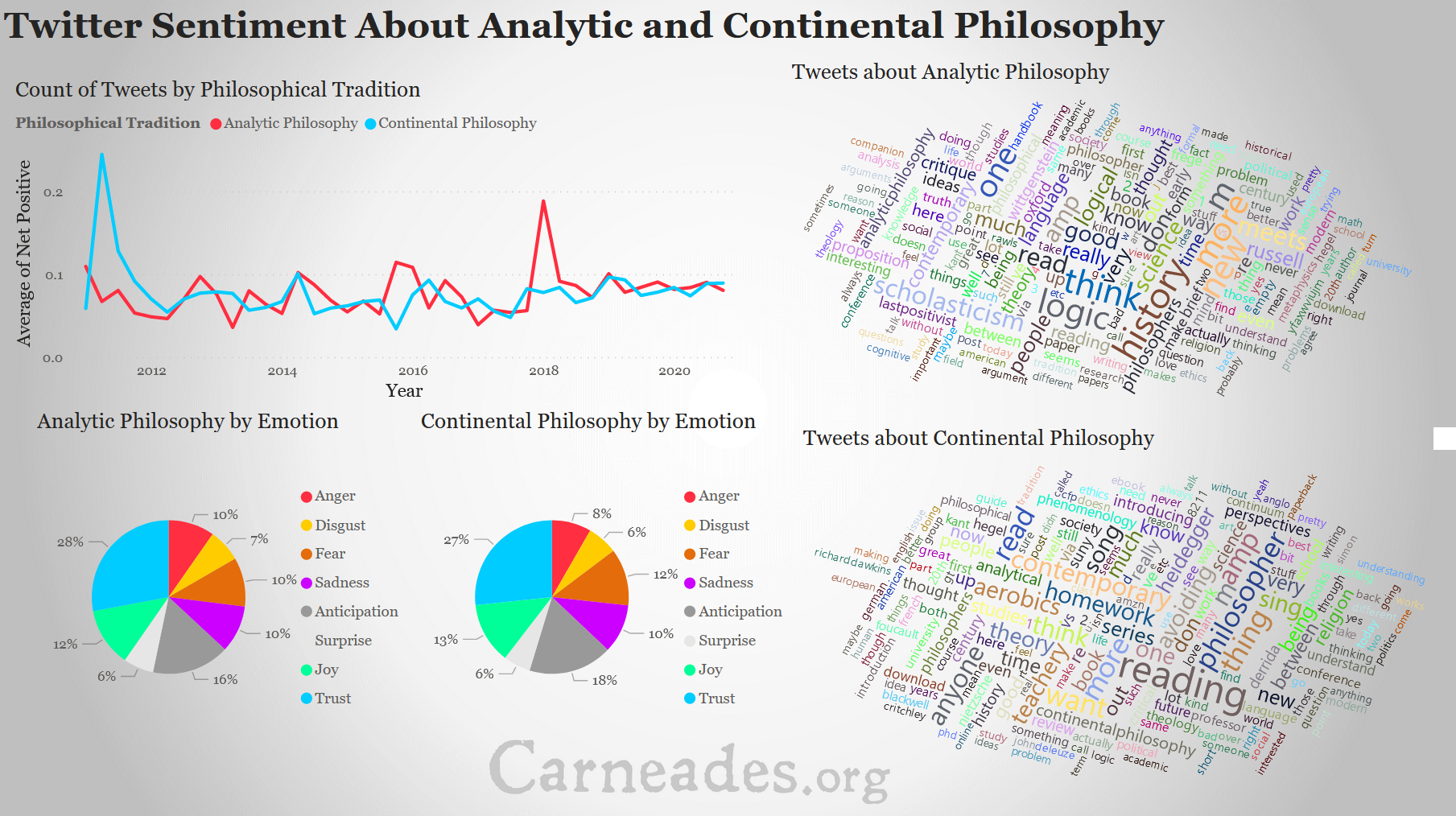 The debate between analytic and continental philosophy has raged for decades, but did you ever wonder who was winning? Would Russell or Hegel get you more retweets? What words and concepts do the denizens of Twitter associate with each tradition? In this post we look at Twitter’s perceptions of Analytic and Continental philosophy to see if we can glean any sense of which philosophical tradition the Twitterverse is more amenable to. If you need background on the analytic/continental divide, here’s a great video primer.

Before digging into the results, here’s a quick primer on how we are doing this. The first step in the process is to gather the data. This is done by scraping every tweet from the last 10 years that featured the exact phrase “analytic philosophy” or “continental philosophy” and then splitting them into two datasets (33,105 tweets). Next we run some automated text analysis on the data. Specifically, in this case we are doing basic dictionary sentiment analysis, identifying the words in the tweets with emotional content. These words are divided into negative emotions and positive emotions. Words are also coded with any number of 8 specific emotions: anger, disgust, fear, sadness, anticipation, surprise, joy, and trust. The dictionary used is the NRC Emotion Lexicon (see below for citation). Here’s a video on the basics:

The specific emotions associated with each tradition are mostly identical. Analytic philosophy inspired slightly more anger, disgust, and trust, while continental philosophy inspired slightly more fear, anticipation, and joy. Looking to the word clouds (which have “analytic”, “continental”, and “philosophy” filtered out), we can see that analytic philosophy is most strongly associated with logic, history, and thinking, while continental philosophy is strongly associated with contemporary philosophers and reading. As one might expect, Russell and Wittgenstein are the most prominent philosophers in the analytic cloud, while Heidegger is the most prominent in continental cloud. Science and religion can be found in both clouds, but science is more prominent in the analytic cloud, while religion is more prominent in the continental one. Check out the video below for a step by step walk-though of these conclusions and how to use the visualizations.

Based on this analysis, it appears that, while analytic philosophy has seen more tweets and interest in the last few years, the sentiments expressed about it have not changed, and are largely in line with those expressed about continental philosophy. That said, we can pick out particular moments in time where one discipline had a larger amount of positive or negative tweets, possibly related to particular events at that time. Overall more people are tweeting about both analytic and continental philosophy, though this is likely due in part to Twitter’s user base approximately tripling in the last decade.